The historic St. Anthony Hospital in Pendleton, Oregon was originally constructed in the early 1900s, undergoing a series of remodels and expansions during its century-long operation.  Due to increased demand and outdated technology, a replacement hospital was built nearby and St. Anthony was abandoned.  Northwest Demolition was contracted by the Hospital Board to demolish the structure in preparations for new development.

The project presented Northwest Demolition with some challenges, notably the discovery of an undisclosed subgrade fuel tank, as well as the need to protect and maintain a basement wall that also served as a retainer for an adjacent roadway.

Due to the haste with which the structure was abandoned, a considerable amount of hospital equipment and furnishings were left behind.  The owner asked that several historical artifacts be carefully removed for relocation, and Northwest coordinated with local business to minimize unnecessary waste.  Kitchen equipment was sold to a local restaurant, a walk in refrigerator was sold to a downtown brewpub, and the distribution of furnishings and miscellaneous medical equipment to charitable organizations was completed with the help of the local United Way.

A high-reach excavator was used to place skidsteer machines on the upper floors to perform interior demolition, after which a standard top down demolition plan was followed.  Since the building was partially underground, complete demolition would have left a large excavation on site.  To address this, as well as to minimize disposal costs, all of the brick and concrete rubble was crushed on site to create a suitable fill material for site restoration, which included an embankment to support the adjacent roadway. 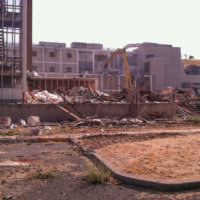 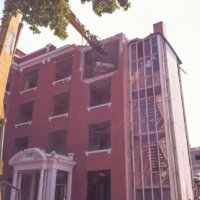 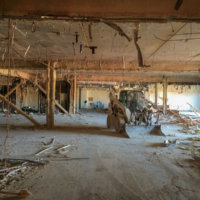 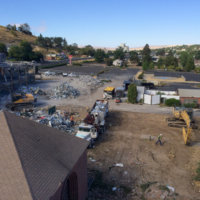 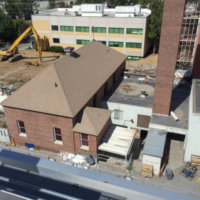